How to peel bell peppers effectively?

We tried everything and there is no easy way to peel bell peppers without doing it with a very sharp knife. Peeled bell peppers are easier to digest (if you or someone in home suffers from Heartburn you should start peeling too :) )

Tried to freeze then dip into hot water, place in hot stove, and directly over a flame, hot oil works but then it gets cooked and soaked.

For those around world (like me), this is bell peppers.

Thanks for any help!

The key is to use a sawing motion with the peeler. Top and tail the pepper, cut it in half or quarters, remove the seeds and pith, then take a peeler (one like this): 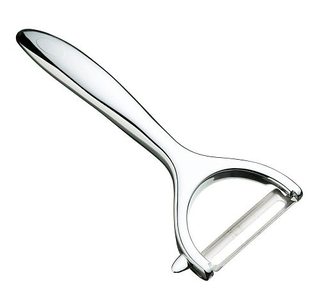 and start peeling, wiggling the peeler side to side, 'sawing' the skin off the flesh.

Put a flame to the peppers (either on the gas stove or a blowtorch). When it's black, it peels great. The meat will not be cooked.

Another way is to put it in the oven until done. When warm they peel great, but of course the meat will be done.

Edit: the method described here will be better, still.

You could try to concasse the pepper. Make light cuts through the skin (not through the flesh) then submerge in boiling water for 30 seconds, then shock in ice water? Maybe the peels get loose the same way a tomato releases its skin when treated this way.

I haven't done this myself, so I don't know if it will work.

When you roast a pepper over an open flame, that burning/charring that happens on the outside is just that tougher outer skin that you are trying to get rid of. You are not actually burning the sweet flesh underneath.

So, you hold or place the peppers over the open flame, until the outer skins are blistered and scorched, rotating and turning the pepper with tongs. Once that is done, put the pepper into a paper bag to cool off. That traps some of the moisture escaping and further softens the scorched outer skin.

Give it a few shakes once cooked, take the pepper out, and the skin peels/flakes right off. I just do it under a running faucet so I'm not fighting with little bits and pieces of clinging skin.

The mistake most people make is that they don't thoroughly scorch the outer skin enough, because they mistakenly think they are burning the whole pepper.

For raw peppers, you'll have to go with some other answerers' suggestions.

Choose 3 lobe peppers, after topping, and removing pith and seeds slice down valleys to get 3 pieces. Sawing motion with peeler top to bottom until peeled.

Not the answer you're looking for? Browse other questions tagged peeling bell-peppers or ask your own question.

12
Is it worth roasting my own red peppers?
10
How to tell when roasted bell peppers are ready to skin?