How can I remove excess fat from stews or soups without refrigerating?

I've read that adding cork (from wine bottles) absorbs the fat. I'm not sure if this works or not.

Are there any other ways to remove excess fat without standing there and spooning out or refrigerating and then removing the solidified fat?

If you want to be really lazy about it, just get yourself a fat separator. Pour in the soup, the fat will rise to the top, and you can do what you want with it (i.e. dump it).

If you're reading this in an emergency, you can do this with just a strainer. You'll get better results if you chill the strainer before each skim, i.e. by rinsing it with very cold water. The fat will tend to congeal on the cold strainer the same way it congeals when it's actually chilled.

I've also heard that the fat will cling to certain leafy vegetables, like lettuce. If you have a lettuce head kicking around, try peeling off a leaf and dusting the top of the pan with it.

If you pour the liquid into a narrower vessel to settle, the fat layer on top will be thicker and therefore easier to remove with spoon, paper towel, or turkey baster. Something like this thermos or this ice tea jug would work without needing to cool it down too much.

It is best done before any thickening with starch/flour.

Since some spices are oil soluble, you might end up straining out some of the flavor, and need to re-adjust the spicing slightly.

One quick way I have seen is to put a few ice cubes into your soup/stew. The fat will congeal around the ice cube so if you take them out before they melt you can get rid of most of your fat.

I just used bread on top of the soup, flipped it so both sides got covered, worked a treat, might fry the bread up with an egg tomorrow. Waste not want not

If the soup or stew has a good layer of fat on top, I've just dropped individual sheets of paper towels on top. Since the fat is on top, the paper towel absorbs it. Remove, discard and, if there's still a layer of fat, repeat.

Once it starts absorbing stock/broth/sauce, then I stop. Usually the fast majority of fat is gone by then.

Now, however, I have a fat separator, which is, essentially, a handled measuring cup with a spout that connects at the base of the cup. I highly recommend spending a few bucks, it's tremendously convenient, especially for someone like me who loves making and eating homemade soups.

You scoop or pour in the liquid from the top of your dish, let it settle, and, like your pot, the fat separates at the top. Since the spout is connected at the bottom, as you pour liquid back into the pot, it pours back the stuff you want, while the fat remains behind. Once you can see the fat level dropping to spout level, you stop, and have almost entirely fat left behind. 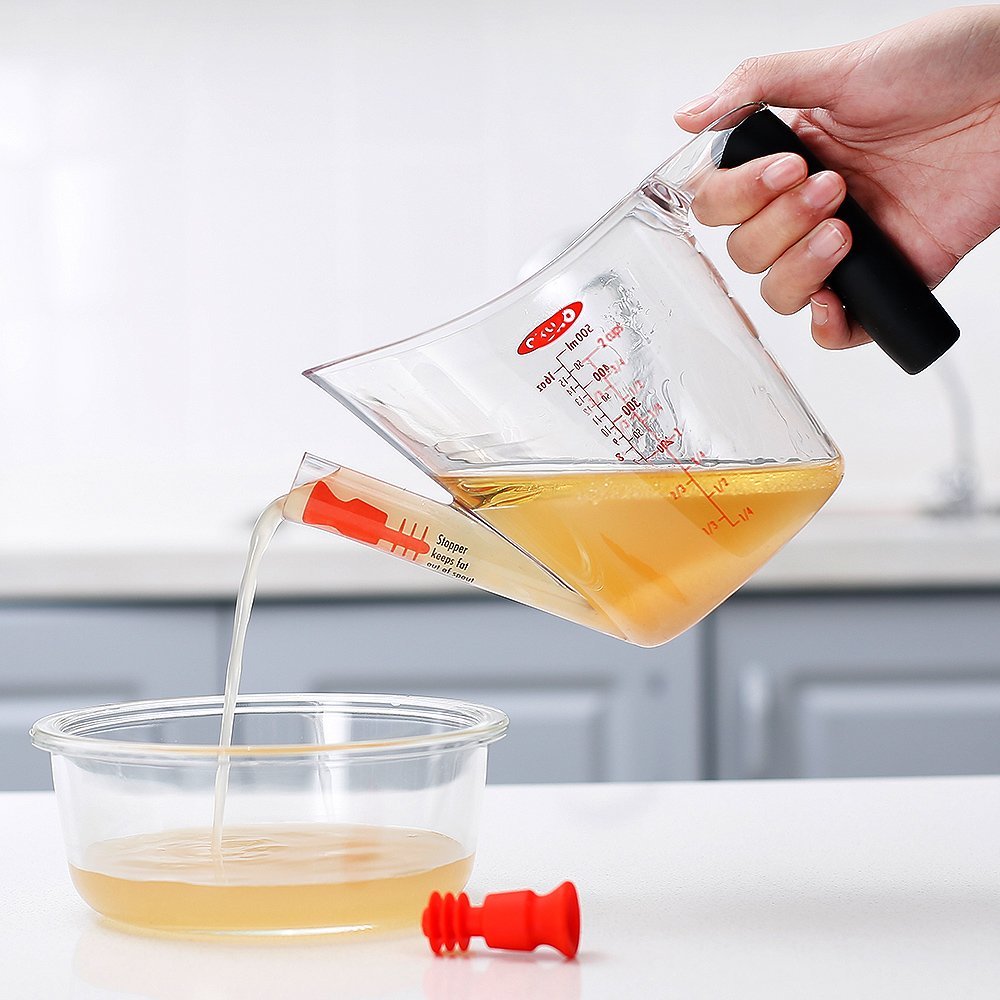 It's also a great way to separate out fat from roasting drippings, so you can use the fat to make a roux for gravy, and have the rich de-fatted pan drippings added back to whatever liquid you are going to add.

I just tried this: Pour cooled stock through a strainer, lined with paper towels, filled with ice cubes. You may have to do it in batches, as it catches lot of fat. This is a shortcut.

I picked up these fine mesh fat skimmers at an Asian market for under $2 each but I also see them online. The cooler the stew or soup is, the better they work but the fat does not need to be refrigerated or solidified for them to work. The fat particles are too thick to fit through the strainer so it can be easily collected. Also great for skimming the foam off the top too. 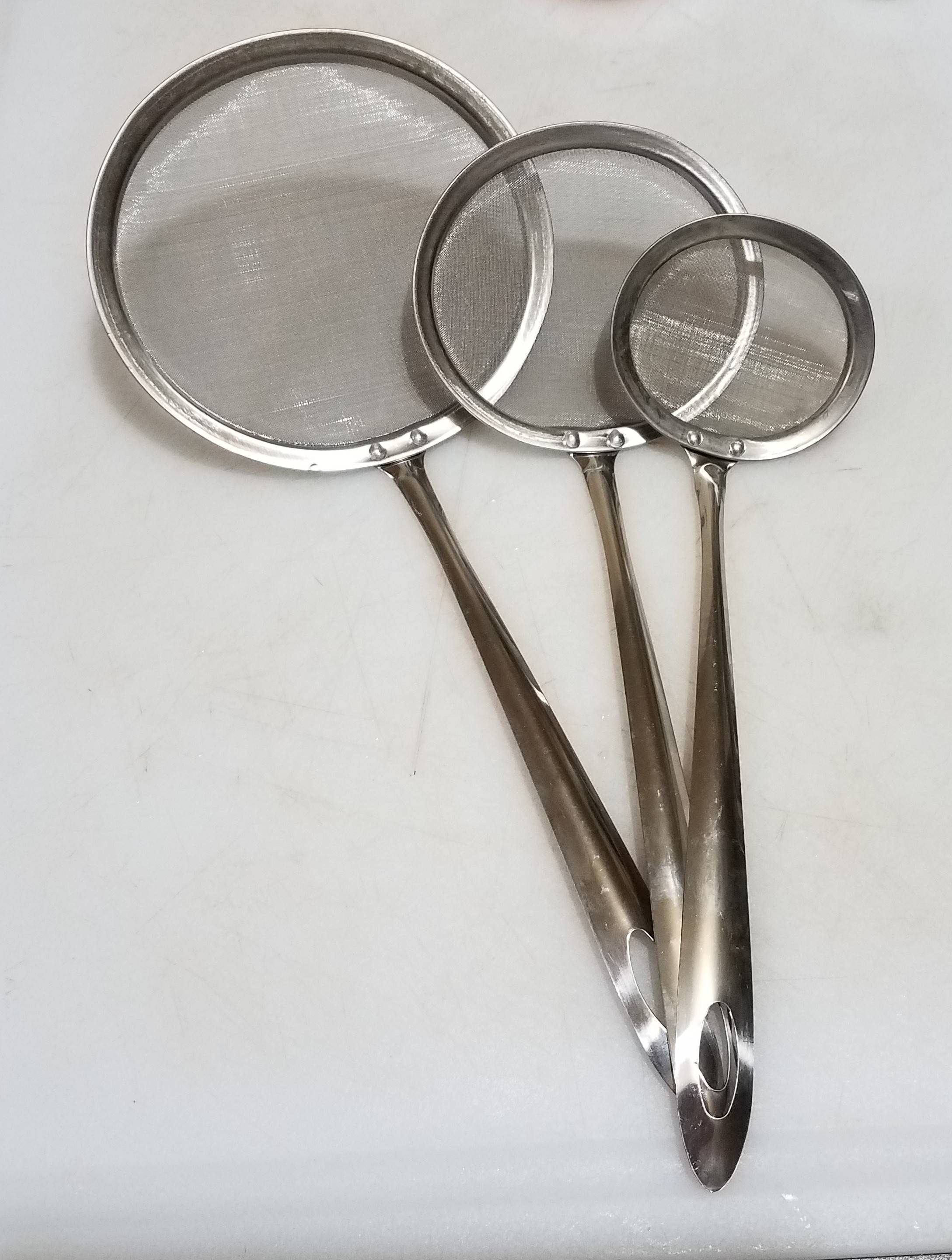 So long as the liquid isn't being mixed (and bubbling from simmering or boiling counts as being mixed), it'll undergo what they call "type 1 settling", where oil floats to the top, and particulates fall to the bottom.

You can either let it stand in a gravy separator, or just let it come to the top of the pot, and either ue a paper towel, like Darin mentioned, a strainer like Aronut mentioned, or even a frozen bottle of water (which will chill the fat so it sticks to the bottle, where you ca wipe it off then try again).

Personally, I normally use the 'spooning' method, but use a laddle rather than a spoon, so it goes much faster.

you could let it settle so the fat rests on the top then use a turkey baster or syringe to suck the fat off the top.

You can soak it up with slices of Bread. I just did it.

Everyone seems to recommend gravy strainers which have a spout at the bottom but any bottle with some form of spout should work if you just turn it upside down... oil will float to the top and you can pour gravy out of the bottom :-)

Try a Grease Grabber. They are a special pad that only absorbs oil and repels all else. If you float it on top of your soup it will absorb all the grease.

AmberAmber
11
3
Add a comment  |
Highly active question. Earn 10 reputation (not counting the association bonus) in order to answer this question. The reputation requirement helps protect this question from spam and non-answer activity.

Not the answer you're looking for? Browse other questions tagged soup fats stews or ask your own question.

8
How do I remove oil from soup?
1
How to separate fats from liquid and where do unsaturated fats go?
-2
How much fat can be removed after cooking medium ground beef into sauce?

12
Does preparation of food change the nutritional content with respect to fat type?
10
Which type of oil/fat should I use for deep frying?
7
Fat content in homemade stock
5
How to add missing garlic flavor to cooked soup
3
How to mix cream to increase its fat percentage?
4
How do you get gelatin from rendering cow fat?